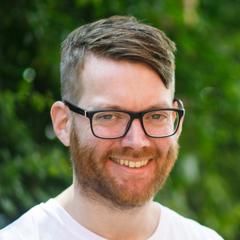 Reflex Studios have arrived on the App Store

Well Thank God that’s another election over. Now we can get back to our regular routine of watching TV without needless opinion polls every day and political debates dominating the airwaves. In the last few weeks, we’ve had to sit back and watch as more and more people pretended to get engaged with politics. Watching the media-savvy politicians attempt to address the big issues without wavering from the official party line. About as dull as it sounds. In Northern Ireland however, we're not as careful, and no more is that obvious than the Nolan Show. It humbly proclaims to be ‘the biggest show in the country’ but for us with an ounce of sense it can be a frustrating listen.

In fact, during the last TV season, my friend Mick got so fed up with it’s circuitous nature that we made a game of it. We grabbed a few pieces of card and wrote out a list of scenarios to tick off if it popped up. We put 5 scenarios on each card and passed them around the room during the show to see if someone could tick them off and fill their card. First one to fill their card wins. Instead of getting aggravated by political party-line sound bytes, we'd cheer them on just to fill out our card. As the final episode of the season aired, I looked at the cards and thought I could make an app out of this. I wondered if many people watched The Nolan Show with the same hopeless, giddy desperation we did. 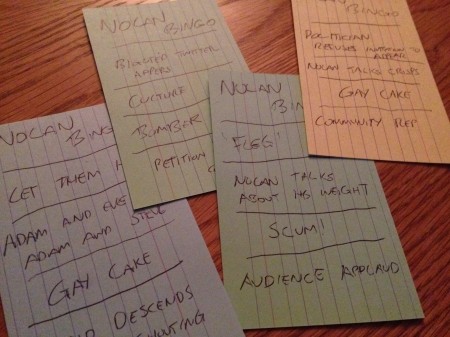 I've always wanted to learn Mobile Development. I've played about with the language and learned how to write a few things on it before, but without any real idea of making an app. I saw this as an opportunity to get Reflex Studios on the app store and see what else we could do. After a few weeks of playing around on xCode, I finally had my Nolan App. I couldn't wait to show it off to the room the next time we were all together. We'll test it on YouTube and see how we get on. 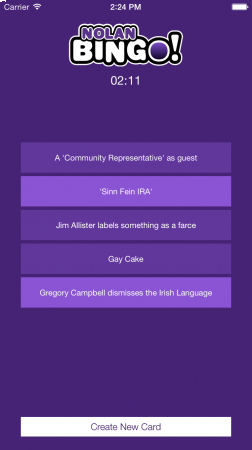 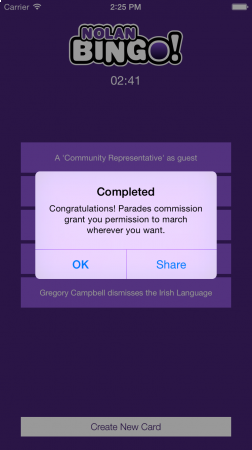 However, my initial sense of achievement was quickly dashed. Only half the room only had iPhones. “What about Android?”. 'iPhone only, I’m afraid', passing the hand-written cards to the Android users. I knew this wasn't going to cut it. I knew I needed to replicate the app on Android. Now, I'm sure the details of converting Objective C into Java would bore even the most enthusiastic computer programmer, so I won’t go into details about it. Besides, no one wants to know how the sausage gets made.

After a bit of trial and error, a bit of debating and a lot of laughing, we finally have our app. We're also adding in Social Sharing so people can share their scores on Facebook and Twitter. I want to get#nolanbingo trending.

It’s Wednesday 13th May 2015. The new season of the Nolan Show airs tonight and I want to see as many people playing along as possible. Get playing and share your score on Facebook and Twitter afterward. The hashtag is #nolanbingo. Download 'Nolan Bingo', now available on iTunes and Google Play.